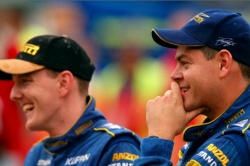 There were no extended celebrations in Noumea for Dean after his second place on debut in the Cusco Subaru. It’s a new week and a new event, with the prologue stage of Targa Tasmania starting today.

And for Targa Tasmania, Dean reunites with both his Maximum Motorsport Subaru, and his old SRTA co-driver Glenn MacNeall. “It was 2004 when Glenn and I were in a car together, but it’s worked realy well. From the very first corner of the first stage we started to note together…it just clicked straight away. Getting the old team together is going to be a bit of fun, and I couldn’t ask for a more experienced co-driver to sit along side”.

It’s only the second time Dean has contested Targa Tasmania, the first being 2006. In this preview interview, we have a chat to him about his chances on the event and what it’s like to be sharing a car with Glenn after so long a break. And to keep up with Dean’s progress make sure you check out the Targa Tasmania website for up-to-the-minute results.