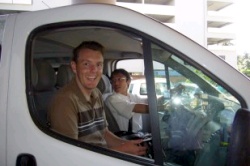 There’s just a few days to go before the second round of the APRC, Rally Canberra starts. It’s Dean’s home round, and it comes at the end of four packed weeks which started with a second in New Caledonia, followed the week after by a third at Targa Tasmania.

Dean is just back from testing with Subaru Rally Team China, and we managed to catch up to him as he arrived Canberra.

“If we can play the game right, get the strategy right and be there at the end, that’s probably going to be our main aim. I expect that particularly Cody and Katsu, and probably Scotty (Pedder) as well, will be firing the shots early in the APRC. So if it works, hopefully we’ll be there at the end and running pretty strong.”

“We’ve got a few newer things in play, in terms of tyres and co-drivers. But I’m looking forward to this event, and Cusco are looking at me and saying ‘This is your round, Deano. We expect you to be able to attack in this one'”.