It’s been a quick turn-around for Dean Herridge and Subaru Rally Team China. Just two weeks after the Chinese Rally Championship visited Mohe for the second round of the series, the teams are now starting to arrive in Jilin Province, on China’s border with North Korea, for the Changbai Mountain Rally.

And just like Mohe, Changbai Mountain will be a completely new event for Dean and SRTC.

“At this stage I have no idea what to expect from this rally! I haven’t see or heard too much about the roads. I believe the area is quite mountainous so I am guessing there is a chance of some twisty roads cut into the hills and mountains. We will have to wait and see”, Dean commented before returning to China.

After a busy week of PR duties in Australia, Dean flies back to China this week for what will be an important event for him and SRTC. An encouraging start to the season in June was followed by the disappointment of an engine failure at Rally Mohe.

Mohe and Changbai Mountain, both based in the far north of China, were always going to be a challenge for SRTC, which is headquartered 2500kms to the south, in Shenzen. The back-to-back rounds have meant some of the team mechanics and support crew have been away from their homes since the start of September. And the engine problems Dean experienced in Mohe have only complicated matters, forcing to the team to rebuild the GRB engine away from home base. 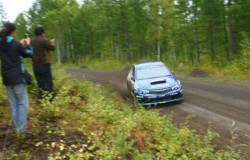 “At this stage not sure on what engine we’ll have for the event. I know they are rebuilding the Mohe engine but I’m not sure if we’ll use it or have a replacement engine for Changbai. But the team has investigated the problems we experienced in Mohe, and I don’t expect any issues at this round.”

“The boys transported from Mohe directly to this event, and have been preparing the car at both venues and on the road. By the time they return to Shenzhen, some of the crew and logistics staff will have been away for 5–6 weeks!”.

“It’s been a big effort by them, and I want to repay them for all the commitment they’ve put in. So I’m really looking forward to this event and locking away a good result.”

Changbai Mountain kicks off with a super special stage on Friday, followed by two days of rallying over what are expected to be wide and twisty gravel roads. And of course, we’ll have results and news, as it comes to hand, here on deanherridge.com.