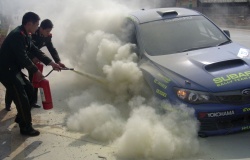 Beginning the final day of Rally Shaowu behind Finns Juha Salo and Jarkko Miettinen, Herridge was looking to bring the Subaru Rally Team China car home for what would have been its third podium in-a-row. But damage sustained on the forth stage of the day led to a small fire under the car, forcing him to retire.

Speaking from the Shaowu service park, Dean explained, “We completed the first pass of the two stages this morning with no problems. Juha and Jarkko had pulled away in the morning, so we made some changes at service which improved the feeling (of the car) when we repeated the stages”.

“However 2km from the end of the SS4 we hit a big hole on the inside of a fast right-hander. It hit hard enough to break the lower control arm and, in the process, snapped the top of the suspension, the steering arm and then pulled the driveshaft from the gearbox. Fortunately we were able to just get around the next corner despite the wheel hanging out near my door!”

Limping to the end of the stage, Dean lost more than a minute to the leaders, and with it third place. But worse was to come. 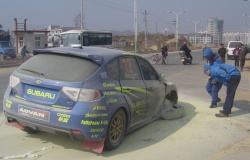 “After leaving time control I checked the damage and reported it to the team, who asked if we could try and drive the car the 10km back to the service park. We made it most of the way, but 2km from service park the dragging tyre caught fire. We stopped to extinguish the fire and save the car from further damage. By the time we had it sorted it was too late to get back to service park to continue”.

“Luckily, and by chance, we’d stopped in front of the local fire department. Which was handy because the tyre continued to reignite for some time!”

Although the final day of the season didn’t go to plan, 2008 has been a banner year for Subaru Rally Team China thanks to the maiden CRC victory claimed by Dean and co-driver Chris Murphy at the previous round in Longyou. 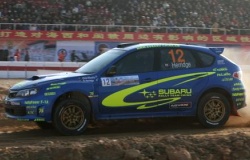 Starting the 2008 Chinese season in a brand new 2008 model Subaru Impreza, Herridge and his SRTC crew worked hard throughout the year to develop the car, combining knowledge gleaned from international Subaru Group-N teams with the experience they’ve gained during five tough rounds of the CRC.

A promising fourth place in Shanghai back in May was tempered by an engine failure at Rally Mohe. But since then, the team has been making strong progress in the championship, Dean and Chris claiming second at Changbai Mountain and victory at China Rally in Longyou.

“Obviously today has been a disappointing way to end the year”, Dean explained. “But we have so many positives to take away from this season. The team and I are very happy with the results we’ve managed to achieve in 2008”.

Rally Shaowu was not only tough for Dean, but also for Juha Salo. Having lead for the majority of the rally, the Finn rolled his Mitsubishi on the final stage, handing victory to his countryman Miettinen.