Dean On Target for Podium 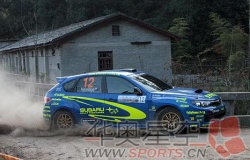 The weather has been cold, the spectator crowds huge, and the stages tricky and narrow. But Dean Herridge, Chris Murphy and the SRTC Subaru Impreza have survived some hairy moments to consolidate a podium position at the end of the first leg of Rally Shaowu.

While Finns Jarkko Miettinen and Juha Salo fought for the lead during 80kms of leg 1 stages, Herridge maintained third place ahead of Kiwi Tony Green. “It’s been quite a difficult day. The stages have been a mixture of twisty sections linked by very fast sections, and the roads quite hard-packed and bumpy”, Herridge commented after returning to service park.

The rally is final round of both the Chinese Rally Championship and the IRC, and is a completely new event for both series. And with a field of more than 30 cars, the opportunity to see some of the worlds best production rally crews drew an estimated 20,000 spectators to Fridays opening super special stage.

In fact the spectators were so keen to see the rally action, not even the cold morning temperatures kept them away from Saturdays forest stages, the cars competing on roads around the World Heritage listed Wuji Mountains. 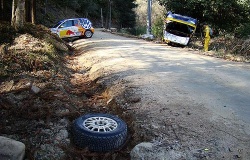 “It was very cold this morning, and in some shaded areas in the mountain section there were still ice patches on the ground”, said Herridge. “We had quite a good run on the first stage; second quickest and just two-tenths behind Salo. But on the next we had a big moment at a forth gear tightening left-hander. I think most the top teams had the same problem, and that corner eventually claimed three of the local competitors. Later on that stage we under-steered off on the ice. We managed to reverse back onto the road, but lost some time”.

With two stages being used three times during the leg, the roads began to cut-up with each passing car. “On the second pass of the stages we struggled a little with car set-up. Our tyre choice probably wasn’t great and I just wasn’t confident with the handling of the car”.

“But we made some changes before the third pass, which made the Impreza much nicer to drive. I was lot happier and more confident”, Dean remarked.

So with another 70kms to contest on Sunday, does Dean think he can move another step up the podium? “Salo has been very quick and I think he will only be caught if he has problems. But Jarkko is only 18 seconds in front of us, so he is the target for tomorrow. But we also need to be careful of Tony Green, and make sure he stays behind”. 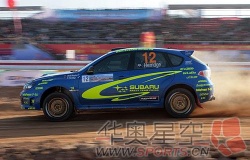 Behind the top four, the gaps are beginning to widen between the large field of Chinese drivers. After his main rival for the Chinese title crashed out, Cao Liu Dong was able to back-off during the afternoon stages. Making the finish line on Sunday afternoon will secure him the CRC title.

Sunday holds another two stages, run three times during the day. “The first one has been cut in half to just over 11kms. We recced the original 20km stage, but final 5km was a narrow concrete section and it was just too dangerous to compete on. Overall the Sunday roads are a little looser and dustier on top, and definitely twister than today”.