Another Strong Showing in Tasmania 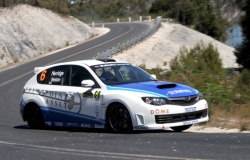 “Obviously, it was a tough weekend”, Dean explained after returning from Tasmania. “This new car was built as a dedicated ‘targa’ car, so to have one day to convert it to Group N spec and expect it to be immediately on the pace was asking a lot. But having said that, we improved our pace as the weekend went on and to finish 6th among some pretty fast Group N and Super 2000 cars was pleasing”.

But Rally Tasmania not only allowed Dean to put more miles under the belt of the new Impreza; it also allowed him to reconnect with old rivals from the Australian Rally Championship, the first time he has contested an ARC round since September 2007.

“It was great to be back and competing in the ARC. These are crews I’ve competed against for most of the past decade. And although the factory teams are now out of the championship, the series still has some very quick production car drivers”.

“We’re still looking at budgets, but we hope to do one or two more rounds this year”. 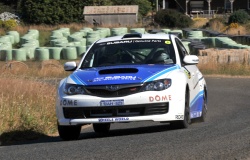 With two events now under the belt of the new Impreza, the Maximum Motorsport crew will ship it back to their Perth workshops and begin to prepare it for Targa Tasmania.

“We’re really starting to collect some good data on this new car. We’ll have a look at some engine management mappings, and we’re getting a good idea of what works in terms of suspension setups. And, of course, I’m getting a lot more experience in the car. So Rally Tasmania, while the final result wasn’t where we wanted to be, has given us a lot more information that we can use in preparation from Targa Tasmania”.

Rally Tasmania, the first round of the ARC for 2009, was a fight between team-mates Neal Bates and Simon Evans in the final appearance of the Toyota factory team. Bates held the lead for most of the event, but was pushed all the way by both Simon and brother Eli, the Evans boys claiming 2nd and 3rd places. The ARC now travels north to Rally Canberra at the start of March, and Dean will have a short break from competition before returning to Tasmania for ‘Targa’ which starts on April 28.