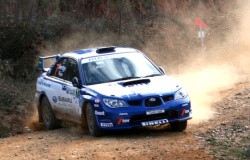 Good news from the Maximum Motorsport workshops this week, with Dean Herridge and the team committing to least one more round of the Australian Rally Championship, the Quit Forest Rally in April.

Having competed at Rally Tasmania, Dean and the team were keen to do their local round of the ARC. “Our plan is to be in Busselton in April”, Dean said, speaking from the Maxiumum workshops. “Being our home event, it’s one that we always like to compete at, and one where we’ve had plenty of success over the years”.

The team also hoped to compete at Rally Canberra in two weeks time, but were forced to pull out due to scheduling and budget considerations. “Having competed at Rally Tasmania, we would have also liked to have contested Rally Canberra as well. But due to the tight scheduling between Tasmanian and Canberra, we were struggling to find a proper the budget to do Canberra. So we’ve decided to commit to the Quit Forest Rally, and really have a good crack at it.”

The Forest Rally will see Dean back in his 2007 Subaru Impreza STi, the same car in which he last won the ARC Privateers Cup. “We’ll be back in the ’07 car. Ideally we would have liked to have used the new (2008-spec) car, but that car needs to be in Tasmania at the end of April for Targa. So we’ll be back in the Impreza I used in the ARC throughout 2006 and 2007. We’ve got plenty of experience with that car and it’s still a very competitive package, so we expect to be able to push for good result”.

The decision to contest the Forest Rally also means Dean has the chance to gain more competitive miles with new co-driver Glen Weston before Targa Tasmania. “Glen’s come on board for the ARC rounds and Targa Tasmania, so this will be another chance for us to get used to one another in a competitive environment”.

The Quit Forest Rally starts on the 3rd of April, and features spectator-friendly Super Special stages in Busselton, with forest stages around the near-by township of Nannup.