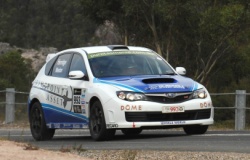 The rain finally arrived, but it was too little too late. The drier than expected roads finally caught up with Dean Herridge’s medium compound tyres during Saturday’s Cethana stage, he and co-drive Glen Weston forced to change two tyres and take a four minute penalty.

The tyre change and ensuing penalty have dropped the #993 Maximum Motorsports Subaru to 7th and more than seven minutes off the leader Kevin Weeks. Ironically, after doing their best to conserve their tyres for the previous three days, the rain finally arrived in the afternoon for the final four stages.

Also experiencing problems on day 4 was Dean’s father Rob. A first-timer to Targa, Rob had made an impressive debut and was sitting in 19th after Saturday’s second stage. But an off on the Hellyer Gorge stage brought his chances of a better result to an end. The car was too far off the road for him to drive out. Although he was able to continue after being towed them out, the time lost saw him drop to 44th in the Modern category.

Today field makes a final dash towards Hobart. There are five stages on the journey from Strahan and Hobart, including the 47km Mount Arrowsmith stage, and the 2pm podium finish at Hobart’s Wrest Point.