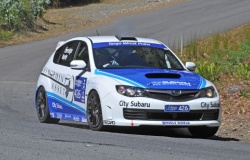 With victories on two of the first three stages, Herridge and co-driver Chris Murphy took the early lead, were never out of the top three fastest cars all day, and sit in second outright at the end of the the first day.

“It was a surprise, based on last years times from this event”, said Dean. “We had a real crack. Hopefully later in the event, when some of the stages suit our car a bit better, we can hold the others guys off that are behind us. Our speed is probably a combination of the car being sorted and us knowing the stages a little better than last year”. 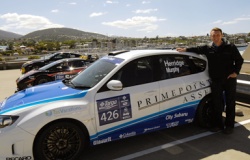 It was a very pleasing days work for the Maximum Motorsport team, the Impreza WRX STi holding off challenges from the Nissan GT-Rs of Steve Jones and Tony Quinn, and the Porsche 911 GT2 of Jim Richards. It was only during the afternoon stages that Jason and John White’s Lamborghini Gallardo was able to pass the Herridge Impreza, to lead the event by 26 seconds at the end of the leg.

But the fight for victory is far from over. During the day the Italian car broke a spark plug, bent a valve and ingested pieces in the process. While it is still running, the Whites will have to nurse it during the final day on nine of its ten cylinders.

Tomorrow the field will wind their way south of Hobart for another seven stages, before returning for the ceremonial finish at Wrest Point Casino in the afternoon.

Modern results after Day One