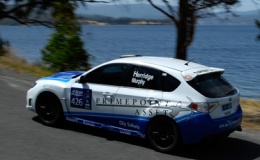 An error with the day one stage times for the Jason and John White Lamborghini was corrected overnight, meaning Dean and co-driver Chris Murphy started leg two with a nine second lead over the local crew. But White threw caution to the wind on the fast downhill sections of the morning stages, and got back past the Maximum Motorsport Subaru to take victory. Dean and Chris finished second, 48 seconds ahead of third placed Steve Jones. 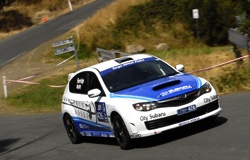 “We were out-gunned today”, Dean said upon return to Hobart. “Although we tried our best, realistically we were not going to be able to match the speed of the Lamborghini. We did a great job yesterday to beat them and win three of the six leg one stages. The car performed really well all weekend. We were driving it on the limit the entire event and it didn’t miss a beat. We’re now equal second in the championship, and I’m looking forward to coming back here in April for Targa Tasmania which will be the ‘grand final’ of the series”.

The result moves Dean up to 450 points in the Australian Tarmac Championship standings, equal second with Steve Jones, and just 50 points adrift of Jason White.