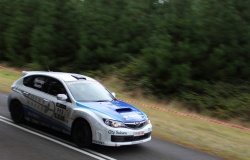 Targa Tasmania is over for another year, with Dean Herridge and Glen Weston completing the final two days of competition as they made their way to Strahan on Tasmania’s west coast, before heading for the Hobart finish line on Sunday.

Both days were challenging. Saturday was longest day of the event, and included a series of 30+ kilometre stages, just to test the already weary crews and support teams. But overnight rain caused competitors plenty of problems on Sunday mornings tricky mountain stages, with several teams crashing out in the final few stages.

Starting Saturday in seventh place, Dean and Glen made some gains during the final two days, with the afternoon stages suiting their hard compound tyres. “We had two pretty solid days”, Dean remarked at the end of the event. “I was a little disappointed on Saturday morning. I’d hoped to make up some more time, but it was a bit of a struggle for the first couple of stages. The roads were still pretty greasy and cold. But once it started to dry out, we started to set some reasonable times. And we made some good in-roads during Sunday morning”. 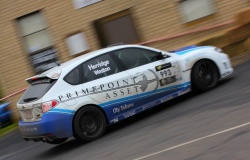 “We lost nearly three minutes on Wednesday morning, and it’s pretty hard to make back that time unless you get a little bit of luck with the weather, or your competition has a problem. We started the event confident that we could challenge Jason and John White for the ATC (Australian Tarmac Championship). But we had a bit of bad luck, and they’ve had a perfect run. So while we could be disappointed, we know we’re punching well above our weight with the Maximum Motorsport Subaru, and it’s a real credit to all the team that we can turn up to an event like this and be competitive against Lambourghinis and Porsches and GT-Rs”.

So with Targa Tasmania run for another year, the Maximum Motorsport crew will now return to Perth and begin preparations for their next event, August’s Quit Targa West.

Check out the Maximum Motorsport Photo Gallery for more photos of the event.