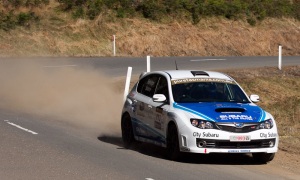 The battle for Targa Tasmania 2011 and the Australian Tarmac Championship is heating up, and Dean Herridge is right in the mix to win the series, and possibly the event.

Today the crews rallied on stages to the north-west of Launceston, including the long and tricky Mt Roland and Paloona stages. And the day again provided plenty of drama. The series defending champion Jason White decided to continue, even though the 20 minute plenty he incurred yesterday effectively ended any chance of winning the event. But while one Lamborghini continued, another retired. Kevin Weeks was still in the hunt for victory when gearbox failure forced his retirement.

That leaves Tony Quinn in the lead with a comfortable margin. But behind him there is a great battle brewing between Matt Close in the Audi TTRS and Dean Herridge in the Maximum Motorsport Subaru WRX STI. 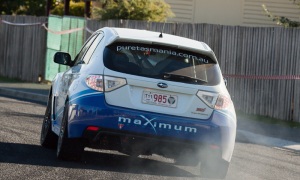 With Jason White still 18 minutes off the lead, the series title looks to be a fight between Herridge (currently on 420 points) and Close (400 points). At the end of the days seven stages, Close managed to jump up to second outright and 27 seconds clear of fourth-placed Herridge.

But tomorrow is the start of the critical final two days of Targa Tasmania. The teams will pack up and travel from Launceston to Strahan on the west coast, and then head east on Sunday to the finish line in Hobart. The final two days feature the long and testing Hellyer Gorge and Queenstown stages, and with rain predicated there is every chance the leaderboard will be rearranged.