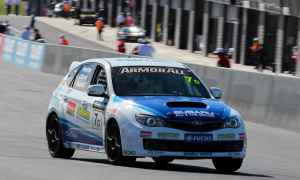 It was a race of highs and lows for Maximum Motorsport at the 2012 Armor All Bathurst 12 Hour. The marathon race, held at the world-famous Mt Panorama circuit, boasted an exotic field of entries, including a trio of Audi R8s, Ferrari 458s, Mercedes SLS AMG GT3s, Lamborghini Gallardo GT3s and Porsche 997 GT3s. Despite the number of super cars, the Maximum WRX STI was moving forward, sitting in the top 10 and the Production Car lead for much of the event.

However late-race turbo problems cost the Subaru WRX STI an agonising 45 minutes in the pits. Although the team fixed the problem and completed the event for a Class D 2nd place, there were not enough laps to make up the time lost. 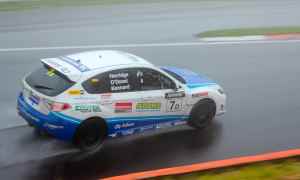 “It’s been an incredible day!”, remarked Dean Herridge at the end of the grueling 12 hour enduro. “The pace was fast early on and we managed to work our way up into the top 10. Unfortunately the oil pipe which feeds the turbo cracked, which caused the turbo to blow when we had a handy lead in the category. The boys did a great job to replace both the turbo and the pipe, and get us back in the race. But we lost a heap of time.”

The variable conditions at Mt Panorama played havoc with the field. After a dry start, heavy rain began to fall at the top of the circuit, leading to series of safety car periods. It was during this phase of the race that the Subaru’s AWD advantage came to the fore. “When the rain came, it really made the track very tricky. Some parts of the track had a dry line, but at the top of mountain the rain and mist was very heavy. It made life difficult for everyone, but the Subaru was perfect in the conditions. While everyone else was losing time, we were able to move forward through the field.” 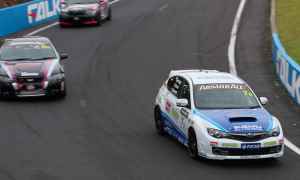 “So it’s been a little disappointing to be the leading production car for much of the 12 hours, and then falter with only a couple of hours to run. The car has run perfectly all week, and this was the only real problem we’ve had. But, compared to last year, we’ve made huge leaps forward. Twelfth outright is a great result for our team. John O’Dowd and Angus Kennard both did a fantastic job in really difficult conditions today. The team did a great job preparing and running the car.”

So it’s great to finish the race with a podium, and our overall performance provides a lot of encouragement for next year.”

The race was won by the Audi R8 of Mies/O’Young/Joens, a lap ahead of the Mercedes SLS of Slade/Bleekemolen. A three hour highlights package will air on Foxtel’s Speed Channel on Saturday the 24th of March, and you can find photos of the event in the photo gallery.