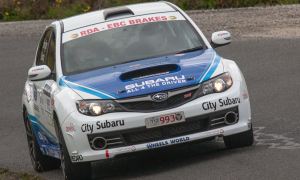 Targa Tasmania 2012 is under way, with a bumper field of 220 crews having now completed the short Prologue stage through the streets of Georgetown, at the mouth of the Tamar River.

And the 21st running of Targa Tasmania sees the return of Maximum Motorsports to tarmac rallying, after missing both Targa High Country and Targa Wrest Point. “It’s great to be back for Targa, flying the flag for Subaru”, offered an up-beatt Dean Herridge. “We competed at the Bathurst 12 Hour earlier in the year, and we’ve been busy with with the West Australian Rally Championship, but this is our first tarmac rally event for 2012. Missing ‘High Country’ and ‘Wrest Point’ makes it almost impossible to defend our 2011 Championship title. But we finished 2nd here last year, and with the right weather conditions, we’ll be pushing the Lamborghinis, Posches and Nissan GT-Rs for the win.”

Along with Dean and co-driver Ben Searcy, the Maximum team includes Graham Iddles and Shane Cary in their 2.0L Subaru WRX STI and John O’Dowd and John McCarthy in the 2.5L WRX STI Bathurst 12 Hour car. “I’ve had my eyes on this car since Brian Green drove it in 2010”, commented O’Dowd. “I regularly drive Dean’s ex-SRTA WRX in the West Australian rally championship, and I’ve used Graham’s car at Targa West for the last two years. This is my first time using the 2.5L car at Targa, but I’ve done a lot of laps around Bathurst in the car, and I’ve known the team for years. So I’m pretty comfortable stepping into the car for Targa.”

Meanwhile, Graham Iddles has re-painted his car in the red and black colours of major sponsor Seibon Carbon. “The car looks awesome in the new colours!”, exclaimed Graham. “With Maximum now appointed the Australian distributor of Seibon Carbon components, it was a perfect fit to have them as major sponsor. I’m also running a Seibon dry carbon bonnet and Seibon wet carbon rear wing. So the car is lighter, giving me an extra edge for the ‘Longford Challenge’ on Thursday.”

Todays Prologue, which determines the starting position for the rest of the event, saw the Lamborghini of Jason White quickest over the 5km course, with Dean 4th fastest. “That’s a pretty good position for us. There’s a little bit if strategy that goes into the Prologue. We were third quickest over Lilydale earlier this morning, so we’ll start 3rd last on the road tomorrow, which is roughly where we want to be.”

Wednesday sees Leg 1 of Targa 2012 begin with ‘northern loop’, taking in stages such as Holwell, Moriaty and Quamby Brook.