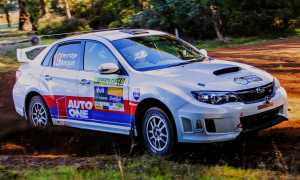 After a lay-off of almost four years, Dean Herridge returned to the gravel last weekend, grabbing at podium finish in the Experts Cup round of the Western Australian Rally Championship.

Herridge was a last minute inclusion, stepping into brand new Subaru WRX STI of the injured Brad Markovic. “It was a very last minute decision”, commented Dean. “But with Brad unable to compete, it was a good opportunity to give his car a really thorough shake-down. I teamed up with Brad’s regular co-driver James Marquet, and we used the same tyres and settings that Brad normally uses. So it gave me the chance to get a good feel for how the car is performing, and we’ll use that to fine tune some of the settings for the next round.” 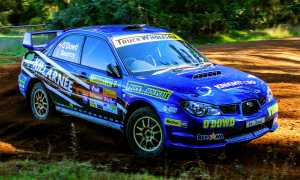 “For the past few years I’ve only been competing in tarmac and circuit events, and I hadn’t done a night stage since Canberra in 2007. We may even have been able to snag second, but James was unwell over the last few stages and I drove without notes. So third was great.”

Along with third outright, Dean and James also won a Experts Cup which is awarded to crews who complete each stage of the event in the top six stage times. 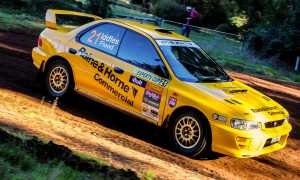 Second in Group N, and seventh overall, John O’Dowd and Ben Searcy continued their good run of form to maintain their lead in the Group N championship. And Graham Iddles and Greg Flood piloted an older Subaru WRX STI to 17th outright, making it three out of three MMS cars to complete the event.

The next event on the WARC calendar is the Lewana Stages which starts on the 27th of July.

2013 Experts Cup – SS3 from Maximum Motorsport on Vimeo. Music by The Exits.