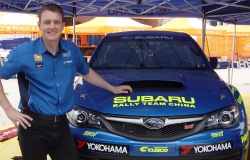 It’s been a busy start to the year for Dean, and the events continue with the first round of the Chinese Rally Championship starting next weekend. Dean is back again with the Subaru Rally Team China, this time in a brand new 2008-spec Subaru WRX STi.

“This is the round that I didn’t do last year. Last year (it) was a half bitumen, half gravel event, so quite difficult for car setup. But this year it’s a full tarmac event. So I’ve almost done the complete round trip of a year in China. We’re in the new 2008 car, and I’m really looking forward to it.”

“I don’t think the stages are very long, and we do them multiple times. It’s almost a sprint event, with stages done several time. And we’ve got a new car, so there’s a lot of new things and new challenges. With the Olympics coming up in China, this is the only round before September. So we’re developing a new car and then we’ll sit on it for three months.”

Like most of the Subaru teams who are running the all-new model 2008 car, SRTC are still working on the development of the Impreza. “The only (testing) time I get into the car is the Monday before the event. We’ll get a days worth of testing. I’ve driven the car (already) on gravel and I think getting a setup for tarmac will be easier than gravel. I think we’re going to be in a very basic form for this event, and just work hard with the guys to get the maximum out of it for this event. There’s a lot of stuff going on with China in regards to development.”

“A top-5 would be good. We’re hopping into a car that is well under done. I think this car has got a fantastic future, but to squeeze in a rally very early in its development. You’ve got the likes of Higgins and Salo, in proven Evo 9’s, and they’ll be pushing hard from the outset. Realistically, if we can get a top-5 in this car, it would be a good result.”

The other big news is that Dean will compete in Shanghai with his APRC co-driver, Chris Murphy. “It’s difficult with the way the Chinese calendar has been moving around. What we’ve done is to agree to do Shanghai and then go straight to New Zealand together (for Rally Whangerai), and then we’ll see how the calendar pans out when the season starts again in September. So nice fit there; no big changes and another good event for Chris and I to get under our belts together.”