It was an 18-year-old Dean Herridge who immediately made an impression in rally circles, capturing the 1994 WA Clubman Championship behind the wheel of a Hyundai Lantra. With that title under his belt, Dean was given the chance to compete at Rally Australia that year, becoming the youngest rally driver to contest a World Championship rally. 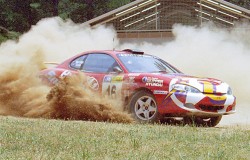 The following year saw Dean gain more experience, driving the family Subaru Legacy on rally sprints to claim 2nd outright in the WA Rallysprint championship, and took another state title, this time A3 class championship in the Hyundai.

1996 saw Dean compete in his first overseas events, with a factory drive for the Kia at three APRC rounds. For 1997 Dean was back in another factory car, this time the newly homologated Hyundai Coupe FX. And the partnership was immediately a success, with 2L Australian championships in 1997 and 1998.

At the start of 1999 Dean packed his bags for England, driving a factory Hyundai in the Rally of Wales and the Pirelli Rally. The team was impressed, with Dean becoming the first Australian to score points in the British Rally Championship.