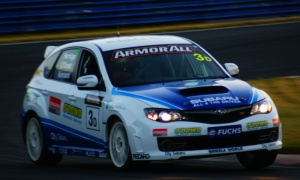 It’s been a tough weekend at Mt Panorama for the Maximum Motorsport team. The promise of a good result evaporated when a fault in the fuel tank caused laps to be lost in the pits.

The race began well, with John O’Dowd starting in the car and settings good times during the opening 50 minutes. But ten minutes before the first scheduled pit stop, the engine in #3 Subaru WRX STI started to ‘cough’ on certain corners. “To be honest, we’re still not identified the actual fault”, lead driver Dean Herridge commented at the end of busy race day. “We made a number of changes to the car, from our normal tarmac rally car setup, and one of those changes was fitting a new bagged fuel cell. It not only gives us greater range, but also helps with maintaining a reliable fuel supply when the car is cornering under load. But it looks like there is a fault within the fuel cell, and this caused the engine to ‘cough’ at various parts of the track.” 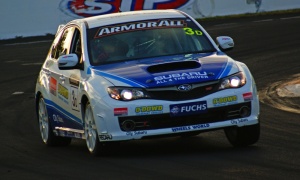 The team immediately began working to resolve the problem, with Dean driving seven or eight test stints in a search for an answer. “We thought we’d found the solution, and around the six hour mark I put in 22 or 23 laps and the car run perfectly. So I brought it back in and passed over the Angus Kennard for his first stint. But within a few laps the problem was back! In the end we rigged up a system that by-passed bag system and that worked well, although we could only run for six laps before needing to refuel. We should have won the ‘Most Use of the Pit Lane’ award!”

“When the car was running, it was running really well and we managed to set the fastest lap time for our class. So it was a bit frustrating, but we’ve learnt a lot and I think the experience has made us all pretty keen to come back.”

The Maximum Subaru did make to the chequered flag for 21st 19th place overall, and 4th place in Class D.

Photos courtesy of All Speed Images.