It’s been ‘all hands on desk’ over the last few weeks, but the Maximum Motorsport Subarus are on their way to Targa Tasmania.

“Targa is now our biggest event of the season”, commented Dean Herridge. “There’s a huge amount of effort put into, not just the preparation of the cars, but also the logisitics and planning. We’ve got plenty of experience with now, but there’s always something the pops up to provide a bit of a challenge.”

This year there will be two Maximum Motorsport WRX STIs competing at the 20th running of Targa Tasmania.

Regulars Graham Iddles and Shane Cary return for their fourth Targa Tasmania, while Dean will drive the #993 WRX STI with new co-driver Ben Searcy. “It’s great having Ben join us this year. He’s competed as both a driver and co-driver at Targa, and last year he partnered with Steve Jones. So he’s a guy with plenty of experience and I think we’ll work well together.” 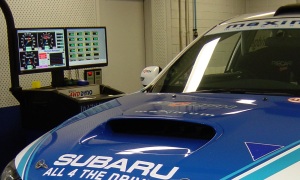 “We’re not running as many cars this year and, as a team, we’ve only got two cars to think about. That gives us more time to focus on the job at hand, and with it being the 20th anniversary of the event, I’m really determined to challenge the Lamboghinis, Porsches and GTRs. We always compete to win, and we always put in 110%. But this year we’ll go even harder, try and put as much pressure on the larger cars, and hopefully come away with a good result.”

The Maximum Subarus arrive in Tasmania on Saturday, ahead of the Georgetown Prologue on Tuesday and the first days competition on Wednesday.