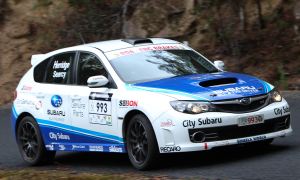 It’s been one of those days for Dean Herridge at 2012 Targa Tasmania. After a better than expected opening day, the first stage of day 2, Rossarden, provided disappointment.

“We’re not completely certain what happened, but it’s likely we’ve thrown a rod. We won’t know for sure until we get the car back to Perth. It was going great but then the engine let go without warning”, explained Dean Herridge at the end of a long day. “Over the years we’ve not had too many problems like this. But we run these engines under a fair bit of stress, so you have to expect things like this from time-to-time. Both Graham and John are going well, so we’ll now concentrate on helping them to get the best result we can.”

Meanwhile, the other Maximum cars has trouble-free runs today. In the 4WD Showroom class John O’Dowd maintained his 5th place, while Graham Iddles moved the #985 Seibon Carbon Subaru up into 18th place.

Tomorrow the crews head out on the long journey to Strahan, on the Tasmanian west coast. A day earlier than on previous years, leg 3 includes the fast Cethana stage, the tricky Hellyer Gorge, and concludes with the long Rinadeena stage in Strahan.