Determined to the Finish 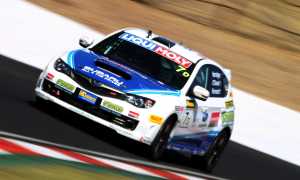 Lead driver Dean Herridge elected the start the race this year and had a good opening stint. But as the first pit stop approached, it became apparent there was an issue with tyre degradation.

“In our first stint the car was very good”, commented Dean. “We managed to get in some good, consistent lap times. But about three laps before I came in for the first change, we started to get a vibration in the front of the car. The front-left tyre was flat by the time I pitted, and we think it was down to the the tyres being tight within the guard. They were rubbing slightly, so we just had to manage that throughout the day. But, a pretty strong start”. 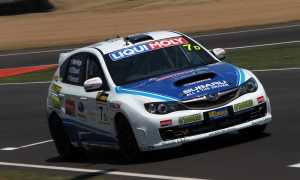 With the tyre problems being managed, the team knuckled down to stay in touch with the Class D leaders. John O’Dowd and Angus Kennard put in good stints during the morning, navigating the sometimes heavy race traffic. But there were echoes of the teams first visit to the 12 Hour, with a fuel tank problem causing a series of unscheduled pit stops.

“There’s two sections in the tank, one on each side. And one side isn’t working”, reported Angus after his first stint. “So we’re running on half capacity, and whenever we get a fuel surge we have to come back to top-up the tank.”

With the fuel surge problem worsening, the team brought the car into the garage to investigate the problem – a stray piece of plastic inside the tank was found to be blocking the fuel pick up. Although the time lost took them out of contention for Class D honors, a finish was still in sight. “At this stage we will not be on the podium but we came here to finish the event and that is what we will do” stated John O’Dowd.

Back on track and with the fuel problem solved, Dean, John and Angus banked some solid times during their stints as the race headed towards the 6:15pm finish. 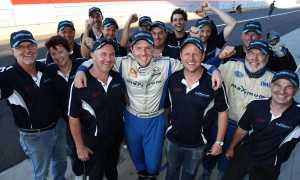 “It was a tough day, with some of the hottest tyre temperatures that have been recorded here”, said Dean at the end of a long 12 hours. “A tough way for a production car to spend 12 hours. But we finished. The boys never gave up. I’m immensely proud of them. Unfortunately we didn’t get the result we came for, but a finish in these circumstances is fantastic, so we’re pretty pleased.”

The Maximum team now heads west to its Perth facility to prepare for the start of the WA rally championship and September’s Australasian Safari.