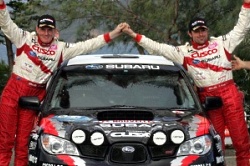 Dean and his new co-driver, Chris Murphy, have scored a confidence-building second at Rally New Caledonia, the opening round of the 2008 Asia-Pacific Rally Championship. It’s a great result for Dean and Chris, who have joined the Cusco International Rally Team for the APRC Pacific Cup events this year.

“This was an event full of firsts. First time with the Cusco team, first time with Chris and first time in New Caledonia. I said at the start I’d be really happy to get on the podium, 2nd is a great result for us. Roll on Canberra!”.

After a cautious start on Saturday morning, Dean gradually increased his pace on the tricky New Caledonian roads, that feature numerous blind crests. “(It’s) very difficult to get a rhythm, the roads are high-speed with lots of unpredictable crests”. During the afternoon stages Dean overtook his new Cusco team-mate Hiroshi Yanagisawa and the experienced local Jean-Louis Leyraud, to jump into third outright and finish the day behind the two MRF Mitsubishi’s of Katsu Taguchi and Scott Pedder.

But it was Sunday morning that provided the real upsets. Leg 2 featured two passes over the 35km monster stage Katrakoin. And it was on the first stage of the morning that both Pedder and Yanagisawa run off the road and out of the rally. With Scott Pedder’s Mitsubishi stranded and unable to get back onto the road, Dean was promoted to second overall, a position he held for the rest of the event. 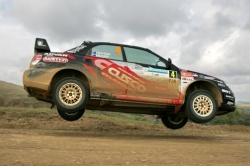 The result means Dean sits second on the APRC leaderboard on 11 points, just five behind Taguchi.

The next event on the APRC calendar is Rally Canberra, an event Dean won in 2004. But competition will be fierce. Not only does Taguchi have a lot of experience at Rally Canberra, Scott Pedder will be looking to make up for his mistake on Katrakoin, and defending APRC champ Cody Crocker will make his first appearance for 2008.

Rally Canberra starts on May 10, and for more information about Rally New Caledonia, check out www.aprc.tv and www.aprclive.com.

And make sure you check out the photo gallery for photos of Dean in New Caledonia.