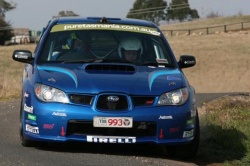 Yesterday Dean said ‘…things can change pretty quickly’ in Targa Tasmania, and change they did. It’s the ‘business end’ of the event, the crews leaving Launceston for the final time and heading towards Strahan on Tasmania’s west coast.

After winning the first stage of the morning, the second-placed Lamborghini of Weeks/Crunckhorn was forced to change a tyre and is now well out of contention.

Their bad luck elevated the Herridge/MacNeall car up into 4th outright, and they completed Saturdays seven stages in that position. Settings times in the top 10, the #993 Subaru WRC STi lost only two seconds to the car ahead, the other Lamborghini Gallardo driven by Jason White.

But during the final stage of the day, the White Lamborghini ran off the road, hitting rocks and suffering both suspension and gearbox damage. At the moment he remains in 3rd place, but may not be able to repair the car in time for tomorrows first stage.

Tomorrow is the final day of Targa Tasmania 2008, and the remaining crews will leave Strahan and head east to Hobart and the finish line.