Having missed the opening Round of the Chinese National Rally Championship last season Dean Herridge made amends last weekend when he snatched fourth outright at the season-opening, all-tarmac Rally Shanghai. 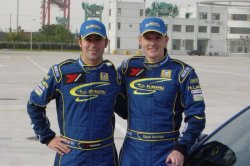 “Our times have been improving with every stage, a very encouraging start,” said Dean at the end of the opening day.

Moving up the order after local ace Xu Lang retired on Sunday morning Herridge edged in on a podium finish right up until the final stage, but fell tantalizingly short, in the end by just 8 seconds.

“Frustrating in a way, but on the other hand to get that close in a brand new car is incredibly positive,” Dean exclaimed at the finish.

Higgins maintained the lead despite the best efforts of Kiwi driver Tony Green who finished second ahead of local driver Liu Caodong.