It’s a quick turn-around for Dean and Chris. Having completed Rally Shanghai, it was straight onto a plane bound for New Zealand and Rally Whangarei. 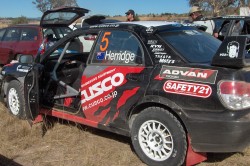 Of course Whangarei is the final of the three Pacific Cup events of APRC 2008, and possibly the last time Dean and Chris will appear in Cusco colours this year. After a second ‘second’ at Rally Canberra last month, Dean finds himself leading the both the Pacific Cup points and the overall APRC championship.

"We’re in a good position. We don’t have to beat Katsu this weekend to win the Pacific Cup. Myself and the team will be trying to work out the best way to attack the event and lock away the Pacific Cup, but also to keep my points tally as high as possible in the overall championship."

"Katsu and Stace…their main target is to beat Cody. So it’s slightly different thinking. My main goal with Cusco is to win the Pacific Cup. Probably for Katsu it’s the overall championship, and the Pacific Cup would be a bonus. So, in some ways, that’s taken the pressure off us, and particularly now that we don’t have to beat him. I think if we could run second to him…then we could proably come away with a win. We have to take each stage as it comes, keep an eye on both him and Jean-Louis and pick our run from there."

Of course Dean is no stranger to rallying on New Zealand’s north island, having won the production category of Rally New Zealand 2004.

"I haven’t been to New Zealand since 2005. I think (Rally Whangarei) does use some of the old WRC roads that I have driven on. I think Jean-Louis went there last year, so he has that on us. We’re all in similar boats. MRF haven’t been there for a while, neither have I, and Jean-Louis may have one up on us. So we’re all a little bit green when it comes to this event. But New Zealand, no matter whether you’re in the north or the south, the roads are all fantastic to drive on. And come Sunday, if the result turns our way, it will be even better."

And having done so well in the first two APRC events, will we see Dean in Japan for Rally Hokkaido? Just click the ‘Play’ button to find out.