Another Podium for Herridge 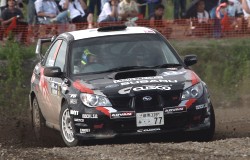 In what proved to be the most dramatic event of the APRC season so far, Dean and co-driver Chris Murphy have emerged from Rally Hokkaido with their third APRC podium of the year.

Round 4 of the Asia-Pacific Rally Championship was held on Japan’s northern-most island, Hokkaido. It’s the location for the Japanese round of the World Rally Championship as well as the APRC, and is normally one of the highest speed events on the APRC calendar. But this year torrential rain slowed all the crews, and proved to be a stumbling block for Dean’s former team-mate, Cody Crocker.

During Saturdays stages Dean was running in the top four behind Katsu Taguchi, Cusco team-mate Hiroshi Yanagisawa and Crocker. But just before the start of stage 6, a thunderstorm dumped massive amounts of water onto the stage. In wet conditions, the cars running early on the road normally have the best of the conditions. But in this case, Crocker, who was first onto the stage, was forced to ‘tip-toe’ through standing water that covered the roads.

The crews following later had a better run, and the leaderboard was re-schuffled with Yanagisawa taking the APRC lead and Gaurav Gill jumping from 5th to 2nd place. Dean and Chris managed to maintain 4th place, just behind Taguchi, while Crocker dropped to 5th and nearly two minutes off the APRC leader.

The weather eased for Sundays stages, which saw Crocker fight back. And although he pushed hard, he was not able to catch Dean, who ran at a calculated pace and collected 3rd place in the APRC and 4th overall. 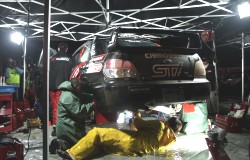 Speaking at the press conference after the event, Dean said “…the conditions on leg 1 made it extremely difficult for everybody. Being in good position for second leg, we were able to match the guys fighting at the front. We just made sure we got in front of Cody and we made sure we had the two Cusco cars at the podium”.

Cusco team-mate Yanagisawa was nudged out of the top position by eventual APRC winner Taguchi, but held on for second place, and another double podium for the Cusco team.

The addition of Dean and Chris to the Cusco line-up has seen the Japanese team register their most sucessful season in the APRC. Co-driver Chris Murphy commented, “We’ve had fantastic year so far with Cusco. They are one of the top teams at APRC…this season (has) confirmed it. In four rallies we’ve got three podiums. It’s been a success and we look forward to continuing it”.

The podium result sees Dean and Chris remain third in the APRC championship points, while Taguchi takes over championship lead from Crocker.

Cusco have elected to drop the next APRC round, the Rally of Indonesia, so their next event will be the Malaysian Rally in mid October.

Photos courtesy of www.rally-hokkaido.com. (For more photos, check out the Photo Gallery).