There were some changes for this years Rally Hokkaido, with service park moving Kita-Aikoku, a location previously used for the WRC event (which, in turn, moves this year to Sapporo, capital of Hokkaido). However the rally route was still similar to last year; always tricky and difficult stages with narrow and lush vegetation. The forecast was for unstable weather during the weekend, spectators anticipating plenty of drama on the event.

Cusco Racing again entered three cars to this event. Hiroshi Yanagisawa was looking not only to score points in the main series but also for the Asia Cup which started with this event. Dean Herridge, crowned first ever Pacific Cup champion, was back to compete in the team’s home event. And with no pressure at all, he would be expected to push as hard as possible for victory. And Yuya Sumiyama, also nominated for the Asia Cup, was back gain more APRC experience after a great effort in Whangarei.

Day 1 stages were located close to Rikubetsu, over 100km drive from Obihiro. Apart from a short stage over an off-road circuit, the day was made up of a series of stages, each more than 20km long and a big challenge for the drivers. The drama started on SS2 when Sumiyama rear tyre hit a tree. He finished the stage, but the suspension damage was serious, and he was forced to withdraw from the rest of the days stages.

Meanwhile, Yanagisawa and Herridge finished morning section 2nd and 4th respectively of the APRC crews. Their cars were promptly serviced at Kita-Aikoku and sent back out for the afternoon stages.

However, from this point, the weather started to close-in, as the forecast predicted. When SS6 started, heavy rain began to fall. The stages were repeats of the morning stages, and were now deeply rutted, causing them to be flooded immediately.

Championship leader Cody Crocker had to drive the 30km stage in the worst of the conditions and lost almost three minutes in the process. Third on the road Herridge also lost 1 minute and 26 seconds, while Yanagisawa, who was fifth on stage, lost 1 minute and 10 seconds too. The conditions too dangerous to continue and the final two stages of the day were cancelled.

That left Yanagisawa at the top of the APRC leaderboard, while Herridge also finished the day consistently and positioned in 4th.

However, to finish the first day in top position has some disadvantages. The starting order for day 2 was based on the results of day 1, so Yanagisawa had to run stages first and sweep the road surface of loose gravel. And the gap back to APRC rival Katsu Taguchi, who would start third on the road, was only 21 seconds.

The battle between Yanagisawa and Taguchi kicked off.

Yanagisawa attacked from the start of the first stage, but the slippery gravel meant he couldn’t push as hard as he wanted. It was difficult to get good rhythm in the conditions, and while he tried to build up his pace on the afternoon stages, Taguchi managed to take the lead to on the seventh stage of the day.

However Yanagisawa didn’t give up the lead easily. At the start of the final stage, a short 1.6km blast, the gap between then was only 2.3 seconds. They finished with identical times, a nail-biting finish after 160km of rallying.

After leading for much of the day, it was a disappointing finish. But with a good points haul for second place, and bonus point from both days, Yanagisawa moved up to 4th in championship standings, and is currently leading the Asia Cup..

In the meantime, Herridge started the day 41 seconds behind Yanagisawa. He could for a win, but also had to think about the Crocker, who was trying his best to erase the 1 minute 7 second gap between them.

With Cusco due to miss the next APRC event in Indonesia, the battle for championship points was important. So the plan was to block Crocker’s attack, and keep him off the podium. And Herridge has already proved this year he has the talent to do the job. He protected his position from his former Subaru Australia team mate, and secured 3rd position.

And that meant Cusco repeated the 2-3 finish of round 2 in Canberra, an excellent result.

Meanwhile Sumiyama, who restarted on day 2, showed consistent driving, setting similar time to Herridge on every stage. He goal was to match the times of APRC contenders, and was looking to score his first point in this series. Due to the retirement on day 1, he was not included in the overall classifications, but was the 5th fastest competitor for day 2, just behind Herridge. And by finishing day 2 as the third fastest Asia Cup competitor, earned 1 bonus point. 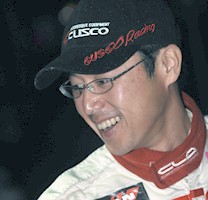 “It’s really regrettable. However it was almost impossible to estimate the situation on day 1. Actually on SS6, I also had flat tyre and was continuing drive rest of 9km. But still I was first position in that day eventually which meant I had to start on the stage from first and to sweep gravel. For myself, stages of day 1 area were my favourite to drive, but almost half of them were cancelled, and we had to fight on day 2 mainly. It was kind of unlucky.

However, it was good experience to have close battle for top with strong driver such as Katsu, and to think about how I should attack. 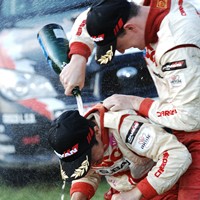 Now top runners of the series are very competitive, so it’s clear that to make good time to win, there is no way other than to attack. So for next event in Malaysia, I’m just going to push!”

“I’m quite happy with the result. The weather in day 1 was unbelievable and was very difficult. I would have liked to have pushed for a win, and I pushed a little bit in the morning on day 2. But then I had to concentrate to block Cody. In the end we made it a 2-3 finish, so I’m happy and hope team is too!” 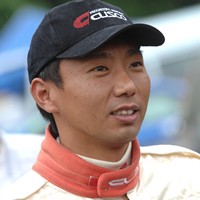 “My main object for this event was to compare my speed with the other APRC contenders, so I was disappointed to not be able to drive the stages on day1. However I was able to stay within 0.3 second of Dean on day 2 and was able to show I can drive in this level. So it was a passing grade.”