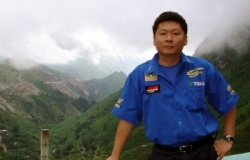 China’s Subaru team manager Jiang Chen expressed satisfaction with the performance of his teams new 2008-spec Impreza WRC STi, following an outright 4th place by Dean Herridge at the opening round in Shanghai.

With Dean’s car completed just prior to the opening round of the Chinese Rally Championship in Shanghai, Subaru China team manager Jiang was happy with the performance of the new car. “The new car was very good. The car is made in China itself, and the other new Group N Subarus being used in other parts of the world have had very limited competition. It’s a completely different generation of rally car, so there are a lot of things (in the car) that we either developed ourselves, or co-operated with other companies to develop.”

Currently SRTC is running one ’08 Impreza, with local driver Li Wei piloting a 2007-spec WRX STi. “We are using Dean to help with the development of the car, to get a good feeling. We are working to develop a number of areas in the car; the brakes, shock absorbers and gearbox, and so on.”

Prior to the start of the season, the team’s goal was to win two events in this year. “We started two years ago. We hope that our third year in the series will bring better results and, of course, we also hope to challenge for the championship.”

Dean heads off to China next week for more development testing with Subaru Rally Team China, ahead of the first gravel round of the series, Mohe in Heilongjiang, which starts on September 5.

Story and photos courtesy of www.srtc.cn.