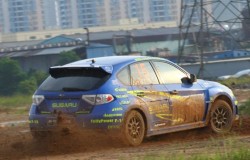 While the eyes of the world have been firmly fixed on the Olympic Games, one extra Aussie managed to slip into Beijing last week. Dean Herridge is just back in China, testing with Subaru Rally Team China ahead of next months second round of the Chinese Rally Championship.

And while it’s been more than two months since Dean sat behind the wheel of the SRTC WRX STi the team hasn’t stood still, with development of the all-new Subaru GRB continuing between rounds.

Speaking after the flight back from China to his home base in Perth, Dean was more than happy with the progressof the car. “I’m really pleased with the progress we’ve made. Since Shanghai, the team has made some great gains with the car”.

Following a creditable 5th-place at the opening round in Shanghai, the SRTC crew have been busy at work, incorporating the latest developments from other Group N Subaru teams around the world. “The boys have been busy since Shanghai. All the Subaru teams are working together to improve the new cars. You’ve got guys like Toshi Arai and Tommi Makinen who now have a fair bit of competitive experience with the car, and we’re able to make use of their experience and knowledge to fast-track the development of our car”.

“Going from tarmac to gravel trim, there’s a lot of extra work to do. There’s been a lot work put into areas like the engine management and centre differential setup. I’m really happy with the progress so far; it’s heaps better in terms of torque and power.” 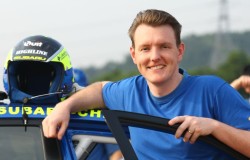 The next round of the CRC is Mohe in Heilongjiang, 1300km north-east of Beijing on China’s northern-most border with Russia. “I’ve seen some photos and the roads look like they’re pretty hard packed and fast. But we’ll have to wait and see; there’s nothing like seeing the conditions for yourself.”

“I’ve got another two weeks, then it’s back to China for two events in September, and the APRC round in November, so it’s going to be a pretty packed last part of the year.”

So did Dean manage to check out any of the Olympics while he was in Beijing? “Only what was on TV. And that was mainly gymnastics, badminton and table tennis. Coming from Australia, it’s not what we’d normally think of being the big Olympic sports. But when you’ve got a population more than a billion people, table tennis can be a very big sport!”

Round two of the Chinese Rally Championship starts on September 5.