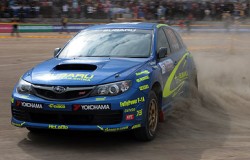 It’s been a drama-filled leg 1 of Rally Changbai, the third event of the Chinese Rally Championship. A new event for the majority of the field, nearly all the leading crews have suffered punctures on the technical and demanding stages run near Changbai Mountain on China’s north-eastern border.

“It’s been a really tricky and demanding day”, Dean commented after the completion of the Saturday’s six stages. “The roads are twisty and narrow, but very high speed. The two 30km stages we ran today (used three times during the leg), averaged 130 km/h and 110 km/h.”

And the rocks which littered the edge of the road claimed more than their fair share of victims, with Juha Salo, Liu Dong Cao, Tony Green, Nutahara, and Dean all collecting punctures during the stages.

“Our tyres are probably too soft. We punctured half-way into the third stage, but we decided to press on. We lost a minute and a half to Salo, but we would have lost more if we’d stopped to change it. Then we picked up some rear suspension damage on the next stage, and we lost a bit more time”.

“But it’s the first real hit-out for the new car on gravel, and we’re keeping pace with Salo. It would be nice to be closer, but we’re pretty happy with the results so far”.

Sunday’s stages are made up of two passes of a 20km and a 10km test. But these look to be even trickier and much slower. “We just need to be careful on these shorter stages. We’re looking good for second, but if Juha has a problem I want to make sure I can capitalise on it.”