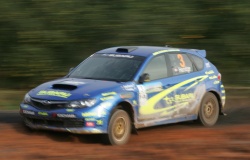 It was a tough, wet and muddy weekend, but Dean Herridge and Chris Murphy have scored an historic win for Subaru Rally Team China at Rally China.

With the Asia-Pacific Rally Championship joining the Chinese regulars for Rally China, Herridge and SRTC stepped up the pace, claiming the team’s first victory in the Chinese domestic championship and the first APRC for podium for the 2008 Subaru Impreza STI.

“It’s an awesome result for the team at what is the biggest rally on the Chinese calendar. Subaru Rally Team China have been working hard to achieve this victory for the last four years. So to do it at just the new car’s fourth outing, at this particular event, in front of hundreds of Subaru fans, and to beat guys like Juha Salo and David Higgins who run well-sorted and proven packages, it’s just incredible. I’m really proud to be part of this team and to achieve this victory for them”, a delighted Herridge exclaimed after the podium presentation.

“The ‘icing on the cake’ is we also finished third among the APRC competitors, the first time a 2008 Impreza has scored an Asia-Pacific podium. For our team to do this, it’s a great tick of approval for everyone in the STRC team”.

But the result didn’t come easily. Held near the city of Longyou, Rally China once again proved to be a tough test for all the competitors. Rain during the days leading into the event made the roads extremely slippery, the situation compounded by some stages being run three times. 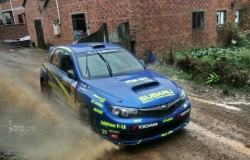 “We were pretty happy with most of Saturday’s stages. Obviously it was very slippery, but we were on the pace of the APRC guys, and well ahead of Salo and the other Chinese competitors. But in the two middle stages we broke a front diff, so we were running in 2WD for nearly 34km. I think we lost around three minutes on stage, and then we ran overtime at the next service and received a 50 second penalty.”

By the end of Saturday’s stages Dean and Chris were placed second among the Chinese competitors, Salo ahead by just eight seconds after he suffered a series of punctures, and seven seconds behind the third placed APRC competitor Yuya Sumiyama. But with the roads drying out for Sunday’s stages, and his car fully serviced, Dean moved past both Salo and Sumiyama to capture a CRC victory and third in the APRC. 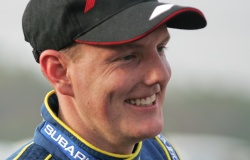 “It was a real battle of attrition. So for this car to claim first place, after the problems we had on Saturday and still have plenty of pace on Sunday, it’s just a great testament to commitment and professionalism of Subaru Rally Team China. I’m really happy for for them!”.

Rally China marks the final round of the 2008 APRC season, Dean securing fourth place in the championship even though he competed in just five rounds of the seven round series. But the Chinese championship has one round left to complete the season, Rally Shaowu which begins in the first week of December.