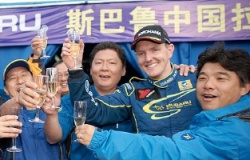 This weekend marks the final event of the Chinese Rally Championship for 2008, Rally Shaowu. The rally is all-new to the championship and is held in the Fujian Province, approximately 400kms inland from China’s eastern coast and almost half-way between Shanghai and Subaru Rally Team China’s base in Shenzen.

Having celebrated their maiden CRC victory at China Rally last month, Dean Herridge and SRTC are confident of another good result at Shaowu.

“The team and I are obviously very happy and motivated by our success in Longyou”, Dean commented after arriving at the Shaowu service park. “This rally is once again new to the championship, so there are plenty of unknowns. The new car has come along way this season and I am really looking forward to the event and trying to finish the season off on a high”. 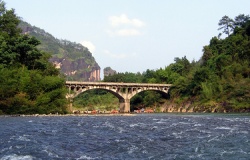 Using the forestry roads that run near Wuyi Mountain, competitors will be faced with 190kms of tough competitive stages. But conditons may be made even more difficult than normal. As is usual for CRC events, each leg will feature three runs over a limited number of stages, in this case two stages on Saturday and two on Sunday.

But the size of the field will be larger than normal. The rally is also the final round of the Intercontinental Rally Championship (IRC), and that means Dean and the other CRC competitors will be driving on roads already used by the Super 2000 and R3-spec cars of the IRC competitors.

“It will be an interesting dynamic to be running behind the IRC cars”, said Herridge. “However it will not be so different to what we have experienced in the APRC and CRC before. It will mainly depend on the road surface and condition to how difficult the second and third passes of the stages will become. So until we see the stages for the first time on recce, this is an unknown quantity. However it will be great to have some of the leading European rally cars competing in China”.

Rally Shaowu kicks off on Friday evening with a Super Special stage, followed by forestry stages on Saturday and Sunday.

Make sure you check back here at www.deanherridge.com for news and results as they come to hand.