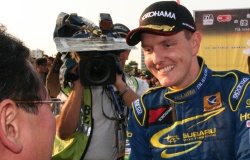 Next weekends Quit Forest Rally look like it will be a cracker! Dean will be back in his ’07 Subaru, his new Impreza currently prepared for Targa Tasmania. But this may be an advantage, as the Maximum Motorsport crew know this car well, particularly on the gravel tracks of the Nannup forests.

While it’s Dean’s second ARC round of the year, ‘Forest’ is the third round of the Australian Championship, with all of the leading contenders making the trek across the Nullabor. The manufacturer teams may have left the ARC, but the quality of the fields hasn’t diminished, and this weekend will be a tough fight between Dean, defending champ Neal Bates, series leader Simon Evans, and Eli Evans who’ll been looking to make up points after his spectacular exit from Rally Canberra.

“It’s a very tough field”, Dean commented. “I think, although there can be some fallout with the manufacturers moving away (from the series), in some ways it gets the sport back to basics.”

“The leading privateers can now see that they can have a shot (at winning events), and I hope that’s what gets the ARC back on its legs again. It should be as good as ever, and if there are some good decisions made by ARCom and CAMs in the direction we take the series, we can have a series that’s as good as it’s ever been. The driver talent and the depth (of talent) hasn’t changed”.

It’s been a while since we caught up with Dean, so in this interview we not only preview the Forest Rally, but also dig in to the results of Targa Wrest Point, Rally Tasmania (and the differences between Targa spec and Group N spec), why he isn’t driving in the APRC this year, and Dean’s recent trip to China. To hear the full interview, just click the ‘Play’ button.