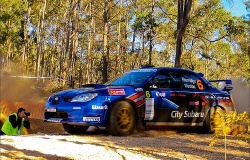 It was a weekend of highs and lows for Dean and the Maximum Motorsport team in the Quit Forest Rally. They finished the event with a 4th place in heat two, but it could have been a podium position if not for transmission problems on Saturday.

“It was an interesting weekend”, said Dean, who left Perth straight after the rally to begin recce for Targa Tasmania. “It’s always great to compete in my ‘local’ round of the ARC, but it took us a little while to get up to speed on Saturday. There was quite a high rate of attrition, particularly with the leading crews. Both Neal (Bates) and Simon (Evans) went out early, so although our speed wasn’t where we wanted it to be, we could have finished with a podium.”

“But we ran into trouble on Saturday afternoon. There was section with a series crests, but after one of the landings we broke something on the car; there was just no drive. We landed after the crest and just rolled to a stop. The boys pulled the gearbox out, and found we’d torn the centre out of the clutch. So that was it for Leg 1. But we managed to get back out late in the afternoon and was classified 12th for the heat”. 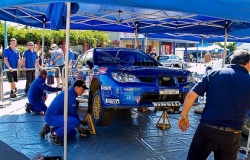 So a disappointing start to the event but Leg 2 was a different story, and Dean and new co-driver Glen Weston were much more competitive during Sunday’s stages. “After the first stage on Sunday morning, we were again too slow”, commented Dean. “Glen and I really put our heads down after the first stage and increased the pace a fair bit. We ending up trading times with Simon and Neal, so it was encouraging”.

“It takes a little while to get back into the swing of things when you’re jumping from one series to another. The ARC heat rounds are all about flat-out speed, whereas Targa Tasmania and Targe Wrest Point are very tactical events, and in China we have a different set of objectives again”.

“But it’s been good to be back in the championship, particularly with the backing from City Subaru. We would have liked to be a bit closer to the lead, but it’s been encouraging”.

Dean’s rally year now begins to speed up, with a weeks testing with Subaru Rally Team China, Targa Tasmania, and then back to China for to tarmac events, rallies Shanghai and Beijing. And that means the Forest Rally may be Dean’s final ARC event for the year.

“The scheduling of Targa Tasmania and the first of the Chinese events means it’s too tight for us to get to Rally Queensland. There’s a possibility we’ll be at Rally Australia later in the year, but for now we’re focused on Targa and then the five rounds of the Chinese series”.