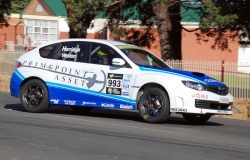 Friday 9:30am Update: There’s been a few dramas for Dean and the Maximum Motorsports Subaru during day 2 of Targa Tasmania. Although he and co-driver Glen Weston were able to keep in touch with the leaders, the smell of oil caused some concerns throughout Thursday’s stages.

“We were dumping oil, and we think it was damaged piston. Under the rules we’re allowed the change the pistons and rings, so the boys have rebuilt the engine overnight!”, Dean said as he prepared for the start of Friday’s stages.

“We should be fine, but it was dry all day. Now we really need some rain. We’re conserving the tyres OK, but we just can’t keep up with the exotics in front of us. If we’re any chance for a win, we need some different weather. We’ve not driven this car in the wet before, but we really need to rain to mix up the field a little bit”.

During leg 2 crews travelled from Launceston to St Helens on Tasmania’s east coast, taking in five competitive stages before lunch. Then a less than leisurely loop back, which included three stages, including a stage through the streets of one of Australia’s most famous motorsport towns, Longford.

While Tony Quinn, Kevin Weeks and Jim Richards all fought for the lead, Dean maintained a steady pace to run within the top 10 cars all day.

Friday’s leg 3 sees the crews again run a loop from Launceston, this time heading to the north-west, with a stage in central Devonport, then south to Sheffield and returning via Deloraine. The forcasted showers have arrived, so today should be great opportunity for Dean to move closer to the leaders.