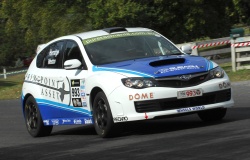 Targa Tasmania has begun in earnest today, a field of 250 cars starting from the Launceston Country Club this morning. And it’s been a trouble-free day for Dean Herridge and the #993 Subaru Impreza.

“It’s been a good day”, Dean exclaimed after the field returned to Launceston having completing a loop of nine stages to the north and west of the city. “There were no issues at all with the car. We completed the first four stages under base time, which was a good way to start. We lost a little bit of time in the afternoon, but we expected that to happen on some of the longer stages which don’t suit our car”.

The way category winners are determined is a little bit different to conventional rallies. Like a WRC or ARC event, each car is timed on each stage. But at Targa, the winner is determined by the penalty time. Each stage has a target base time. If you take four minutes to complete a stage that has a three minute base time, one minute is added to your penalty time. The crew with the lowest penalty time at the end of the event, is the outright winner in each category.

“We’re currently 9th, but we hope to have some of our penalty time reduced. We slowed on the last stage for an accident which cost us around 10 seconds. We’ll appeal to have that time given back to us, and hopefully we’ll improve our position”. [Update: Overnight, the 10 seconds were taken off Dean’s penalty time, moving him up into 6th position]. “But overall it’s been good. The tyres are in good condition, and it’s all looking positive for tomorrow’s stages”.

Like Dean the other three Maximum Motorsport crews completed the day without incident, Dean’s father Rob sitting 25th overall after his first day to ‘Targa’ rallying.

Tomorrow the crews head east from Launceston to St Helens for five competitive stages, returning to the city via a southerly loop that includes three stages that include the famous Longford township stage.