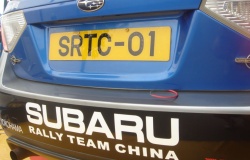 Rally Beijing, the second round of the Chinese Rally Championship, has been postponed. Originally scheduled to start on July 3, the event will now begin with a ceremonial start on Wednesday the 8th of July, with stages run on Thursday and Friday (the 9th and the 10th).

It’s a little unusual to see a rally event run during the week, but it does allow us time to catch up with Dean before he flies off to Beijing. There’ll be an audio interview available here on deanherridge.com at the end of next week. We’ll find out what happened at Rally Nanjing and even get the scoop on the TV crew that will be following him to Beijing.