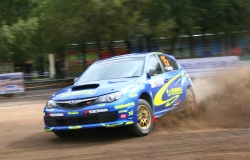 A faulty intercom started a chain of events that ruined Dean Herridge’s chance of a podium at Rally Jiangning Nanjing.

Just five kms from the end of the second of Sunday’s four stages, Dean and co-driver Chris Murphy were holding 4th place and looking to close in on 3rd-placed Juha Salo. But a faulty intercom distracted the team, and while Chris was attempting to fix it, they crashed on a tightening right-hander.

“We were going well this morning”, commented Dean after returning to service park. “We were coming towards the end of the second stage this morning, and the intercom cut out after we hit a bump in the road. We kept going for another couple of kms while Chris was trying to fix it. But I got caught on a tight right-hander. We were just going too fast for the corner. I couldn’t slow the car down in time and we ended up in a slow roll”.

“We’re both OK, but obviously not the way we wanted to start the year”.

In the race for victory, Jussi Valimaki took a start-to-finish victory overcoming challenges from both David Higgins and Juha Salo for an all-Mitsubishi podium.

The SRTC crew will now have to quickly repair the car and regroup before the second round of the championship, Rally Beijing which begins in just two weeks time.