(Update: Tuesday 12pm) The potential dangers of international travel struck close to home this week. Flying from Hong Kong to Beijing last Friday, Dean Herridge had the misfortune to be seated three rows away from a passenger confirmed of being infected with H1N1 influenza virus.

Although Dean has not experienced any influenza symptoms, local health regulations have forced him be quarantined in his hotel room until Friday.

Speaking on her Facebook page, Dean’s wife Natalie revealed the news on Monday evening. “Dean is fine. He had the misfortune of sitting within three rows of someone with Swine flu on his flight to this weekends rally in China, and is now in a Beijing City hotel in quarantine. Hopefully he will be out in time on Friday to spectate the last day of the rally.”

And during a phone call earlier today (Tuesday), a very healthy sounding Dean confirmed his plight. “I’m feeling fine; just a little unlucky to be seated close to someone who has swine flu. We were hopeful on Monday that I would be given an exemption to compete in the rally, but the Chiense authorities are not taking any chances.”

“I’ve been moved into a hotel in Beijing that is being used to house around 200 or so foreigners who are in quarantine. I’m being tested twice a day by medical staff who are fully suited with masks and googles. They take it very seriously and it’s good they are doing so. It’s just disappointing I won’t be able to participate in the event. Plus it’s a little boring being couped up in a hotel room for most of the day!” 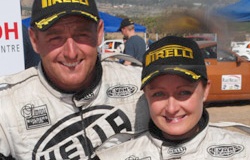 However problems issuing a visa at such short notice ruled Eli out of contention, and Simon Evans will now drive the lead SRTC Subaru Impreza. Simon had already planned to attend Rally Beijing as a spectator, and so is able to fill in for Dean. Chris Murphy, who arrived in China on a different flight, will co-drive for Simon and is currently preparing for the event, the opening stage scheduled for Thursday morning.

Photo of Simon and Sue Evans courtesy of rally.com.au