Herridge Back on Home Turf

Dean Herridge made a swine-flu-free return to Perth on Monday night, having spent much of last week quarantined in a Beijing hotel.

During the final leg of his journey to contest Rally Beijing with Subaru Rally Team China, Dean was seated a few rows behind a passenger who tested positive for swine flu. Chinese health officials have been taking no risks in their fight to stop the spread of the virus, and along with other passengers from the Hong Kong-Beijing flight, Dean was forced into quarantine for five days.

Luckily, Dean remained in good health throughout his five-day isolation. But it meant he missed Rally Beijing completely.

“I wasn’t released until late on Friday night, the final day of the rally. I didn’t even get to spectate!”, a healthy sounding Dean said after returning to Perth. “The team normally has dinner after each event, and they waited for me to arrive. So we all got to to catch-up, but it would have been better to have contested the event. And as luck would have it, my mum had flown over to watch me drive. Not only was I not in the rally, she was not allowed to see me because of the quarantine. We did get to spend a day sightseeing together, but it wasn’t really the week we’d planned!” 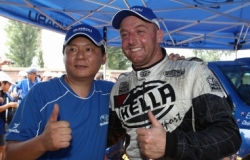 Luckily for Subaru Rally Team China, Simon Evans, who Dean has rallied against for many years in the Australian Rally Championship, was able to step into the lead Subaru at short notice. In Beijing to discuss future opportunities with various teams, Simon took the opportunity to show off his driving skills and completed Rally Beijing in a creditable 5th place. (David Higgins won the two-day tarmac rally, followed home by Jarkko Miettinen, Jussi Valimaki and Tony Green).

But while Rally Beijing didn’t go to plan, things are looking up for Dean with the Quit Targa West Rally. A change in dates for the third round of the Chinese series means Dean is now able to confirm his entry for the event. “I’m really looking forward to it. I’ve only started once in it; that was in 2006 when Peter Brock had his tragic accident and the rally was halted. For the last two years the scheduling with other events has meant I’ve missed it. But now the third round of the Chinese series has been pushed back, so we’re got a spare week and I’m really excited to be able to get back in the Maximum Motorsport Subaru, back in tarmac trim, and have a good crack at it. It certainly beats sitting in a hotel room!”

The Quit Targa West Rally begins on August 20, with four days of tarmac rallying near Dean’s home town of Perth. Final dates for Rally Fogang in Guangdong, the third round of the Chinese Rally Championship, have not yet been confirmed, but it is expected to run on the 29th-30th of August.