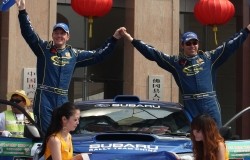 It was a day to ‘play it safe’ for Dean Herridge and the SRTC Subaru Impreza during the final few stages of Rally Fogang.

The third round of the Chinese Rally Championship, just six short stages were scheduled for leg 2, meaning there was little oppoertunity for Dean to move up the leader board after all the crews completed the morning stages without incident. “We controlled our pace this afternoon to make sure we made it to the finish line. With the stages so short, once the first few were run there was little chance for us to catch Jussi (Valimaki)”, Dean commented at the podium presentation.

“There was rain on the final stage, which made things interesting on the concrete roads! But we got through without a problem and the car was very good today”.

“Now we’re looking forward to Rally Shaowu. We had a good run there last year until we broke the suspension on the last day. But it’s a rally that we have some experience at, and Chris and I, and all the SRTC team, will be targeting a good result”.

Sunday saw no change to the top-5 positions, meaning David Higgins took victory, just ahead of his brother Mark, with Jussi Valimaki in third.

The Chinese Rally Championship now moves back to gravel, with the next round, Rally Showau, beginning on the 18th of September.