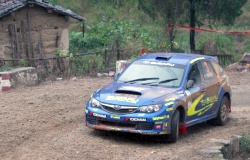 After a long mid-season break, Dean Herridge returns to China this weekend for the fourth round of the Chinese Rally Championship. Rally China, based around Longyou, is also the final round of the Asia-Pacific Rally Championship. And that means Dean will be battling against former APRC rivals, including Motor Image Subaru driver Cody Crocker and Katsu Taguchi and Gaurav Gill in the MRF Lancers.

Even though the competition is tougher, Herridge is full of confidence leading into the event he won last year. “I’ve got really fond memories of Longyou”, Dean said before leaving for China. “In ’07 we led the event, had some problems, but then came back to win five of the six stages on Sunday. And then to win it last year; that’s probably one of my top-five moments. To be there and help Subaru Rally Team China achieve their first CRC round win was fantastic. The excitement of the team was incredible, and then to top it off with a podium in the APRC section of the event…”

But while Longyou has provided Herridge with success in the past, some of the best production rally drivers in the world will also be vying for victory. “It’s going to be a quality field this year. We’ll have Cody Crocker and Emma Gilmore for Motor Image, MRF with Taguchi and Gill, Cusco with their EVO Xs, the new Super 2000 Proton. And that’s just the APRC teams! We’ve also got a really strong field in the CRC at the moment with Juha Salo, Jussi Valimaki and it looks like Jari Ketomaa is coming across to run in the Prodrive team. So three really quick Finnish guys. And then you have David Higgins who’s ‘owned’ the Chinese championship for the last two and half years, and Tony Green has a ride with a new team for this event. There’s a dozen quality drivers and teams who are all going to be fighting for the win. So anywhere near a podium or a win would be great for us”. 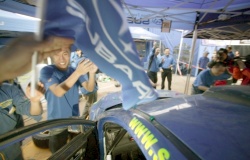 “We’re desperate to have a good rally. We haven’t had a great year, so we really want to finish the year on a high note at these next two events. We’ve got some different things to try. Normally (at this time of the year) there wouldn’t be too much to talk about development-wise. But we’re going over earlier for this one. We’ll hopefully get a day or so for testing, and the guys have got a really good list of things we’ll try and improve on the car”.

“Longyou has always been a good event for me. We think we’ll make some good gains with the changes we’ve got planned, the conditions will suit our tyres a little more, so I’m pretty excited about the event”.

To hear the full interview with Dean, just click the ‘Play’ button. Rally China starts next weekend, with a ceremonial start on Friday the 13th, and stages run on the 14th and 15th. And keep checking www.deanherridge.com for news and results from Longyou during the event.