A Mountain Podium for Dean 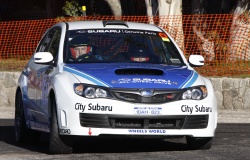 It was a successful return to the ‘other’ mountain for Dean Herridge and the Maximum Motorsport Subaru Impreza WRX STi, the West Australian team claiming a podium finish at the 2009 Mt Buller Sprint.

Mt Buller is the first round of the 2010 Australian Tarmac Championship, and third place was great way for Herridge to start the series.

“We’re really pleased with the result and the way the car performed over the weekend”, Herridge commented at the end of the final timed stage. “Among the top six place getters there are some real exotic cars. So to claim a podium is a real tribute to both the team and Subaru Impreza WRX STi”.

The event was won by Jason White in a Lamborghini Gallardo, while second place was taken by Steve Jones in a Nissan Skyline GTR R.

“At various points of the weekend we managed to better the times of both Jason and Steve. The car performed really well all weekend, and this result is a great start to the Tarmac Championship. We’ve come away with a good points haul, and it gives us a lot of confidence leading into next months Targa Wrest Point event”. 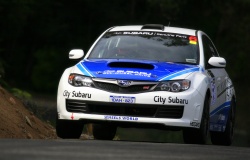 “It is a great feeling to come back after a couple of years and still produce a result like this. Mount Buller is a very unique event and with the road surface constantly changing depending on the weather, you have to make sure that you are concentrating for every corner of every run”.

With Mt Buller completed, Dean’s attentions now turn to the final round of the Chinese Rally Championship in Shaowu, contested on gravel roads 600km south-west of Shanghai and beginning on December 18.