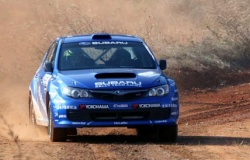 Rally Shaowu has proved again to be a tough test for the Chinese Rally competitors, and in particular Dean Herridge and the Subaru Rally Team China Impreza WRX STi. “We’ve been struggling all day”, said Dean who completed the leg one in fourth place.

It’s the second time the CRC field has travelled to Shaowu, situated in the Fujian Province, approximately 400kms inland from China’s eastern coast and almost half-way between Shanghai and Subaru Rally Team China’s base in Shenzen.

“We’ve struggled today”, said Dean who started the event as first car on the road. “We had a diff issue during the middle loop of stages, and the boys did an incredible job to change the gearbox without running over time. We’re still struggling to find a good feeling in the car. But that said, we’re still running so there’s always the chance to improve tomorrow”.

Meanwhile the other international competitors have had their own problems. Juha Salo was fighting Jari Ketomma for the lead during the early stages, but crashed out of the event on stage 4 while in second place. And Jussi Valimaki was lucky just to make it to the start line. The Finn crashed his Mitsubishi into a rock wall during pre-event testing, the impact breaking the ribs of co-driver Marko Sallinen.

At the head of the field Jari Ketomaa continues to lead, Salo’s retirement elevating David Higgins into second place, Valimaki into third, with Dean fourth and well ahead of the first Chinese driver Cao Dong Liu.