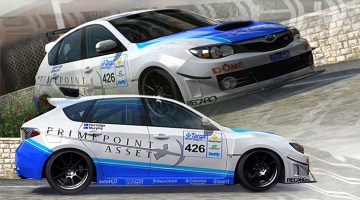 For a long time gamers have been able to ‘drive’ Formula 1, WRC and even Australian V8 Supercars on their game consoles. But now rally enthusiasts, using an Xbox 360 and Forza Motorsport 3, can jump into the drivers seat of the Maximum Motorsport Subaru Impreza WRX STi.

Forza Motorsport 3 was released in October and sold one million copies worldwide in the first week of release. It was too much of a tempation for the dedicated team at Autoart Tuning, who set their skills to work, faithfully reproducing the #426 Maximum Motorsport WRX STi that debuted at last years Targa Wrest Point. 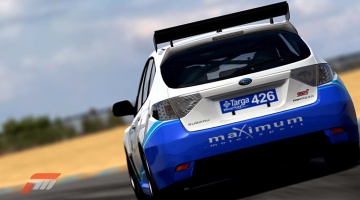 We’re always looking for something different”, commented Autoart tuner Nathan Elcoate (aka TGM Overlord). “I came across Dean’s catchy livery in middle of last year, before Forza Motorsport 3 was available, and knew we had to do it.”

“Our painter, ‘Rugged Ronnie’, is a Tasmanian. So doing a Targa car was right up his alley! Within a week he’d faithfully reproduced the stunning livery, complete with hand-made decals and logos. The car looks spectacular, and it has received great reviews.”

“Then myself and our tuner ‘OzzyPrid3’, we’re both Queenslanders, set about giving this STi the ‘go to match the show’. The tuning engine in Forza Motorsport 3 allows for almost infinite tuning and adjustment. Everything from engine and suspension upgrades, to tweaking rebound pressures, brake balance, downforce, diff lock, toe settings, and more. The tuning process took a further week to complete, and it was tested on many of the race and rally tracks in the game.” 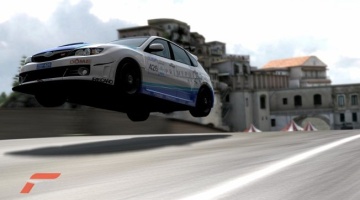 “It was then sent to our race and test driver, ‘Catty32’ in Sydney, to see what the car was capable of. And he didn’t disappoint. The ‘Dean Herridge Subaru STi’ by Autoart hit Top 10 times on the Leaderboards on the ‘Point to Point’ and ‘Tarmac Rally’ tracks. In fact on one track, Ralli Di Positano, ‘Catty32’ placed the car at #9 on the International Leaderboards in it’s class!”

And to see the car in action, check-out the video of ‘digital Dean’ competing in Forza Motorsport 3.

UPDATE: Autoart have now updated their car to the 2010 livery. Check out the results here: