A little Battered, a little Bruised 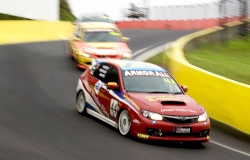 It wasn’t the ending anyone expected at the Bathurst 12 Hour last Sunday. After qualifing 14th quickest, the Jim Hunter Subaru WRX STi, shared by Jim Hunter, Barton Mawler and Dean Herridge, made good gains during the morning.

“We didn’t really get a great run at qualifying and we were a little further down the grid than the car deserved. But we knew that our race pace would be respectable”, a relaxed Dean commented before the start.

In mixed weather conditions the team had a strong start and after the three hour mark, found themselves running smoothly and on the lead lap. This was soon to change when the team had some trouble with a brake pad change during a pitstop, the time lost causing them to fall a lap behind the leaders.

With the unpredictable weather continuing, including a fallen tree on the circuit, the fight-back started and by the eighth hour the #44 Subaru was seventh place outright, with Dean in the car and chasing down Evo X of Peter Hill, Eric Bana and Tim Leahey.

But on lap 130, Dean’s race came to dramatic end. A problem with Hill’s Mitsubishi left it stranded in the middle of the track, between The Cutting and Reid Park. 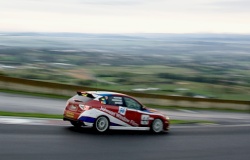 At the time, Dean was on the tail of the eventual winner, the BMW of John Bowe, Garry Holt and Paul Morris. With caution flags waving, both Dean and John Bowe slowed. But while Bowe managed to swerve to the right of the stranded car, Dean was unsighted and slammed into the rear of the Mitsubishi. The damage to both cars was extensive, putting them out of the race.

“Firstly, I am just glad that everyone was OK”, Dean said a few days after the accident. “I was advised by the team that there was a car in trouble, but in a different part of the circuit. Coming up the hill, out of The Cutting, it’s a 4th gear, 100km/h plus section of track. I guess the extra split-second of vision that John had, was the difference between him managing to swerve and just miss Peter’s car, and me driving into the back of it.”

“Thank goodness for the HANS devices; I woke up on Monday with a few sore muscles in my back and neck. But considering the force of the impact, I’m feeling fine”.

“I am just sorry for both teams involved, because it was going really well up to that point. Our car was very competitive and we had done a good job to move up the order. I have to thank Barton for a great job during his stints and particularly Jim and his team who have been great all weekend. Jim’s passion and motivation is incredible and he has vowed to come back bigger and better in the future”.

The race was won by the #20 BMW of Bowe, Holt and Morris, just ahead of the Wall/Wall/Symonds Evo X, with the Seton/Crompton/King Mitsubishi taking third place.