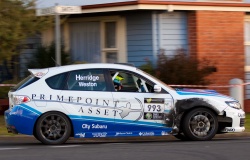 Leg 1 of Targa Tasmania 2010 was challenging. But Thursday’s Leg 2 was a test of character.

After surviving yesterdays wild weather, Dean Herridge started the ‘North-East Loop’ in equal fifth place. But the day got off on a wrong note, thanks to a stray rock. “The first stage (Sideling) is runs through some heavily forested hills, and the road was still fairly damp in patches. We weren’t trying push too hard on cold tyres, but that stage is littered with sharp rocks on the edge of the road. And, unfortunately, we had the misfortune to run over one early into the stage. We struggled on as best we could, but the tyre was deflating and eventually disintegrated”. 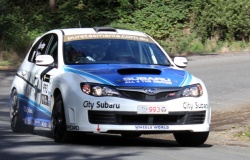 “I think we lost almost three minutes on the stage”.

“But we were competitive on the other stages. Our main goal all along was to win the ATC, and there is still a long way to go in this rally. So we’ll start again tomorrow, see if we can make up some time on the crews in front of us, and try and put ourselves in a position where we can capitalise if any of the guys at the front run into problems”.

Tomorrow the crews set out on Leg 3 of Targa Tasmania 2010, with eight stages to contest as they make their way from Launceston to Devenport, and return via Deloraine.