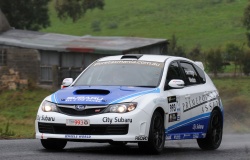 Leg One of Targa Tasmania has seen some rough and wild weather. It was a tough day at the office for Dean Herridge and the Maximum Motorsport crews, with high winds and sleeting rain contributing to a number of accidents in the 260-strong field.

At the end of the stages, Dean Herridge led the Maximum Subarus, sharing equal fifth place and 50 seconds behind rally leader Jason White. “Given the circumstances, it’s been a reasonable day for us”, Dean explained. “It was wet all day; I think SS5 was the only stage where it didn’t rain. We’re on hard tyres, and the conditions just didn’t suit us. We struggled all day, but the main thing is we’re still in the event. We lost a lot on competitive crews today; Kevin Weeks, the Vandenbergs and Tony Sullens are all out. So to have just made it to the end of the day, and not too far away from the lead, is not too bad of an effort”. 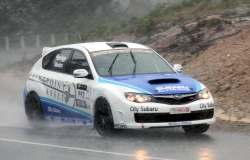 Of the other Maximum crews, Graham Furness and Graham Iddles put in great efforts to finish the leg 24th and 32nd respectively. The one sour note was an accident involving Brian Green’s WRX STi. The Kiwi hit a post after understeering off the road. While the bodywork damage looked relatively minor, the damage to the engine was significant, and will force them to sit out the Leg 2 while repairs are made.