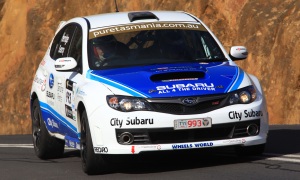 It’s been a tough five days of rallying but at the finish line in Hobart a very happy Dean Herridge took the title of Australian Targa Champion.

“It’s been our aim for two years to win the championship”, Dean told the assembled media at the Hobart finish line. “And we thought we’d be a chance in that, but it’s sometimes hard to have our little Subaru battling against the Lambos and the GT-Rs. We thought a concentrated effort on something like the championship would be something that would be achievable.” 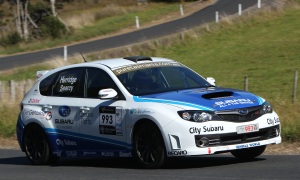 After moving into second place on Saturday, Dean was happy to consolidate his position and ensure he and the Maximum Motorsport Subaru WRX STI took the championship title. “Overnight we decided we were happy with second, which is a good solid result, and today’s been all about conserving our spot, and the last 24 hours it’s been all about getting it home and winning the championship.”

The event was won by Tony Quinn in a Nissan GT-R, Matthew Sims took third place in another GT-R, and second place is Dean’s best ever result at Targa Tasmania. “It’s still a thrill to win a championship, and I’m very proud to be second in what was arguably the most competitive Targa field that has ever been assembled”.

Have you entered our Subaru STI giveaway? You have just a few hours more!

Sign up to our newsletter before the end of today, and you’ll go into the draw to win one of three great Maximum Motorsport prizes. Sign-up for the newsletter at www.maximummotorsport.com.au/newsletter.