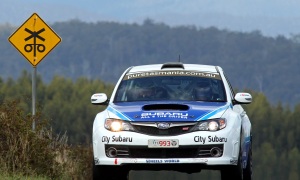 The rain came and threw the field into disarray. That’s the story of Targa Tasmania Leg 4.

Heavy rain had been predicated for the weekend, and it arrived on time. And while other crews run off the road or ran out of luck, Dean Herridge and the Maximum Motorsport WRX STi revelled in the conditions.

Starting the day in fourth place, Herridge moved up to second place and into a good position to win the Australian Tarmac Championship. “It’s been pretty difficult actually”, commented Dean at the end of a long day of rallying. “We’ve had a good run through today, but we’re just trying to keep it smooth. One of the difficulties has been the water just running across the roads, so it’s been unbelievably hard conditions with the rain.”

Starting with the famous Riana stage, Herridge put in a series for fastest stage times during the afternoon rain to move past Matthew Sims into third, and then Matt Close for second place.

At the front, Tony Quinn continues to lead, and even extended his lead during the day.

Tommorow is the final day of Targa Tasmania 2011. The spectacular ‘Strahan’ stage opens the day, then ‘Queenstown’ and the 58km ‘Mt Arrowsmith’ stage, before the crews head toward Hobart for another three stages and the finish line.